Super Street GAS 4×4 Trucks have been a popular class with USA-EAST Sled Pulling for many years and will return in 2020.    The 2020 season will begin in on July 9 at the Big Butler Fair in Prospect, Pennsylvania.  The class will make its first-ever appearance at the Somerset County Fair in Meyersdale, PA on August 27 this year.  The class always has a great mix of the popular Big Three Manufactures battle of Ford Vs. Chevy Vs. Dodge.  The finals for the class will be on Saturday, September 19 when the class returns to Sharon Speedway near Hartford, Ohio.

Mike Lockwood from Hadley, Pennsylvania pushed his high-powered Chevrolet to the point championship in 2019.  Lockwood’s “Back N Black” emerged at the 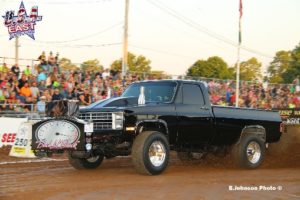 top of the point race after a very grueling season marred at the end by a rain-out of the final pull of the season at Crawford County.