USA-EAST welcomed the Hot Rod V-8 Tractors a few years ago and the class has taken off and become one of the top divisions of pulling.  With eight different sponsors in 2019 and nearly $5000 in end-of-season point money the division has attracted nearly thirty different mem

This super level of participation has generated serious promoter interest in the class for the upcoming season with three new stops in Pennsylvania geared up to host the Hot Rod V-8s with non-points action.  The tractors will pull at the Jefferson County Fair in Brookville, Pennsylvania on July 21 and then on to the famed Buck Motor Sports Park near Lancaster, Pa on July 25 and eventually to the huge Clearfield County Fair in Clearfield on August 6.  A total of fifteen hooks await the Hot Rod V-8s in 2020.

‘Mad Jack” with owner/driver Louis Roy from Imperial, Pennsylvania took the championship crown in 2019 becoming the 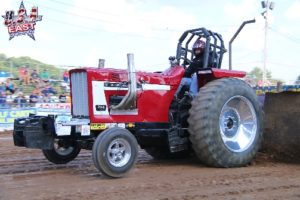 first-ever class champion outside of the state of Ohio.  The tractor is an International 706 with a very stout Chevrolet engine under the hood.