NATE AUGUST GETS FIRST ‘BIG RIGS’ WIN AT THE BUCK

NATE AUGUST GETS FIRST ‘BIG RIGS’ WIN AT THE BUCK

“Work N Progress”, a beautifully prepared Kenworth with C-15 CAT power and driven by Nate August from Freedom, PA took the win (355.95) on Saturday at the annual Trucker’s Day at the Buck Motor Sports Park near Lancaster, Pennsylvania.  This was August’s first win with the newly ramped machine that has moved to the Big Rigs Series for the first time in 2022.  “Work N Progress” was a multiple year champion with the former PA Posse division with USA-EAST.

Chris Jeffries out of Wyoming, New York grabbed second (351.39) before the sell-out crowd at the famed Buck.   Jeffries purchased the “Bad Dog” Mack from the state of Virginia earlier this year and has done remarkable work to bring the former champion back to major league contention.

Third place went to the current USA-EAST point leader Jeff Lautanan with “Moody Blue” (340.11).  Lautanan had been on a hot streak at the Buck having won each of the past two hooks at the southern Pennsylvania facility.  Brian Smith was fourth with his great looking Peterbilt from Odenton, Maryland named “Snow Blind II”.  This Cat Powered Peterbilt was the former “Double Down” truck out of the state of Indiana. Brian purchased this truck earlier in the year and this was his first time competing in the Big Rig class this year.

“General Stupidity” also from the New York based Jeffries Team was fifth on this night as the very interesting and crowd favorite 1983 GMC General with 3406 CAT power continues to try to find the right combination.

The Big Rigs return to action this Thursday at the Crawford County Fair in Meadville, Pennsylvania with a 7:00pm start time.  This will be the final tune-up for the high-powered semi class prior to the annual Canfield Fair Super Pull on Saturday, September 3rd. 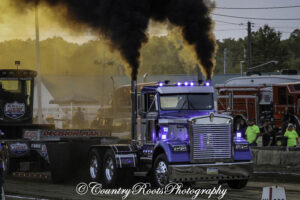