The Lautanen Family have been supporters  at the Ashtabula County Fair for many years. Living just 3 miles away you can definitely say that it is hometown and they swept all three of the semi classes.

The Big Rig Semis semis were a points class this year and saw some heavy hitters come out.  Jeff Lautanen and his Cat powered  Peterbilt he calls “Moody Blue” was the test hook and laid down a perfect pass with a distance of 322. Next up was the first time we saw the Bonner/Francis Team out in 2022 with the “Maximus Prime” Macks. Maximus Prime II with Dale Francis behind the wheel was the next truck with a great pass at 299.59 taking 2nd place. Followed by his team mate was Dick Bonner and his “Maximus Prime” Mack with another distance of 299.26 taking the 3rd position.  Nate August, former USA EAST Posse Champion, moved up to the Big Rigs this year. Only his second time down track this year the “Work In Progress” Cat powered Kenworth is still working the bugs out and was on a solid pass when the turbo intake pipe blew apart leaving the Kenworth short at just 218.61. Bud Kranaur and his Cummins Powered Kenworth was 5th place as he had trouble keeping it between the lines and was dq’d.  It is noted that the “Jerry Attricks” Kenworth of Jerry Ray was absent from this event after suffering major driveline damage at the Warren County Fair on Friday night.

USA East’s newest Semi class, Pro Street Semis,  were also on hand for this event. This class is proving to be a great class in 2022.  The winner of the Pro Street Class was the current 2nd place points leader,  Bob Lautanen with his Cat powered Peterbilt.

Matt Gabriel, the grandson of Bob Lautanen,  with his 81 Peterbilt was the street stock semi winner on Sunday evening.

Winning at anyone’s hometown fair is a tough job anytime, but winning with 3 different trucks in three different classes is almost unheard of. Congratulations on a job well done by the Lautanen Family.

The next Big Rig event will be this Saturday at the famous Buck Motorsports Park in Lancaster Pa. The Annual Truckers day event brings semis from many different states for both a trucks show during the day and Semi pull during the evening of pulling. 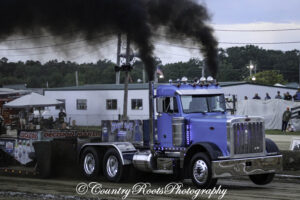