Jeff Lautenan from Jefferson, Ohio made a powerful pull to grab the victory in the USA-EAST Big Rigs Pulling Series at the Cattaraugus County Fair in Little Valley, New York this past week-end. Lautenan’s “Moody Blue” is a 1998 Peterbilt sporting a single charger C-15 CAT from the Jerry Martin Shop in Ephrata, Pennsylvania. The truck’s third win of the season propels “Moody Blue” to the top of the Big Rigs Series points for 2022. Second went to “Stray Cat” driven by Josh Wagner of Tyrone, Pennsylvania. This 1996 Pete 379 also has Caterpillar power under the hood and is competing with the Big Rigs for the first full season. The former Virginia State champion “Bad Dog” now in the Chris Jeffries garage out of Wyoming, New York grabbed third before the sell-out crowd at the southern tier facility. It is also noted that the revamped “GeneralStupidity” Big Rig also from the Jeffries’ team made its first hook of the season at this event. The truck is a 1983 GMC General with 3406 CAT power that was a one-time heavy hitter on the NY Outlaws circuit. These Big Rigs will join others as they gather on this Friday night at the Warren County Fair in Pittsfield, Pennsylvania for their annual championship event. Two divisions of tractors and the high-powered Run What Ya Brung Trucks are also on the program. 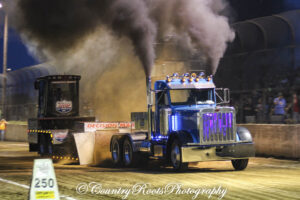